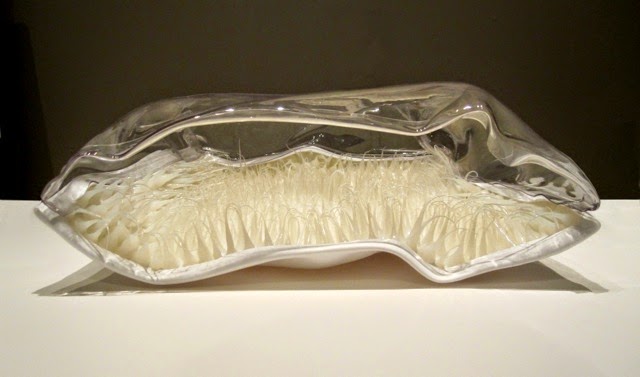 Michigan Artist, Tim Powers is an unabashed materialist whose work revels in minimalism, but he is not at all resistant to one metaphorical symbol, the pillow. In effect, “Tim Powers: Below the Surface” at the Grand Rapids Museum of Art, is a quiet meditation on the mundane and intimate space of sleep. His source of investigation is the philosophical and existential oppositions that manifest themselves in the industrial materials he uses. The theme of the unconscious is carried through in the ethereal hues inherent to polystyrene and latex that collectively invite the viewer into a meditative space. But what stirs this exhibit are the oppositions Powers designates in the details. They are full of physically engaging contradictions that lure you inside the work. And while dreams themselves remain nameless; a sustaining eternal question about what makes our own landscape lingers. 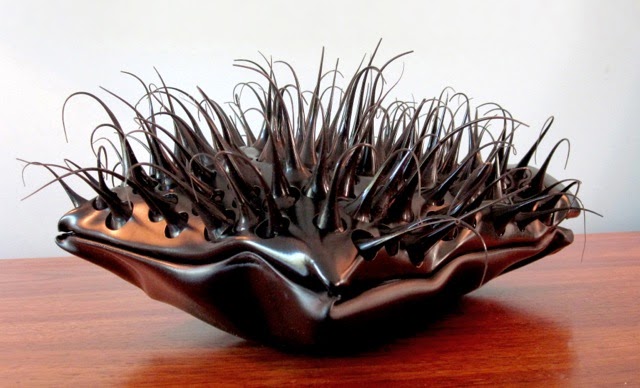 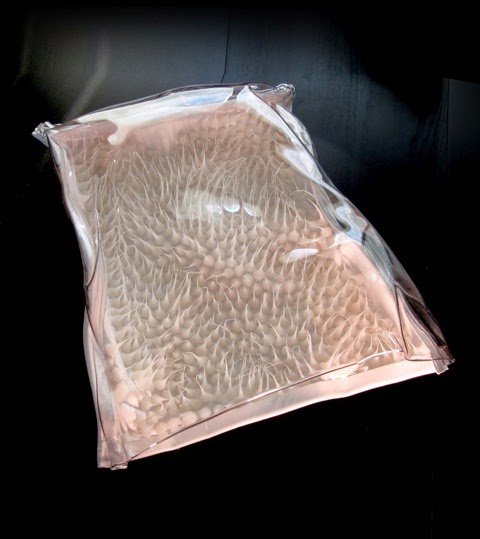 Powers grew up on the west side of Detroit until he was seven. He is the youngest of four. His father, Daniel Anthony Powers, a graduate of the University of Detroit was a mechanical engineer who designed and manufactured hardware. Along with acquiring several patents, Daniel became president of the thriving Precision Hardware, which manufactured panic and fire exit hardware for over half a century. Precision Hardware was situated along Fort Street near Del Ray, an area cut off from the rest of Detroit by a deeply industrial landscape: the River Rouge and Zug Island. Physically, the company was an amalgam of repurposed buildings they had purchased one after the other in a perfect row, including what was once the local meat market. Each building was referred to by its original owner’s name—Shimmle’s, Dewy’s—and each served a dedicated function of the company: a foundry, inventory, shipping warehouse, a churning machine shop. Tim would spend summers working in front of a drill press and a large bin of parts, manually clamping down and rote drilling. He ate his lunches on the asphalt as the air mixed with the toxins emitted from the Ford Rouge Complex and Wayne Soap—an industrial plant that rendered animal parts. 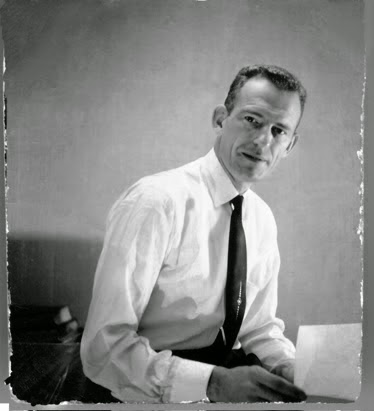 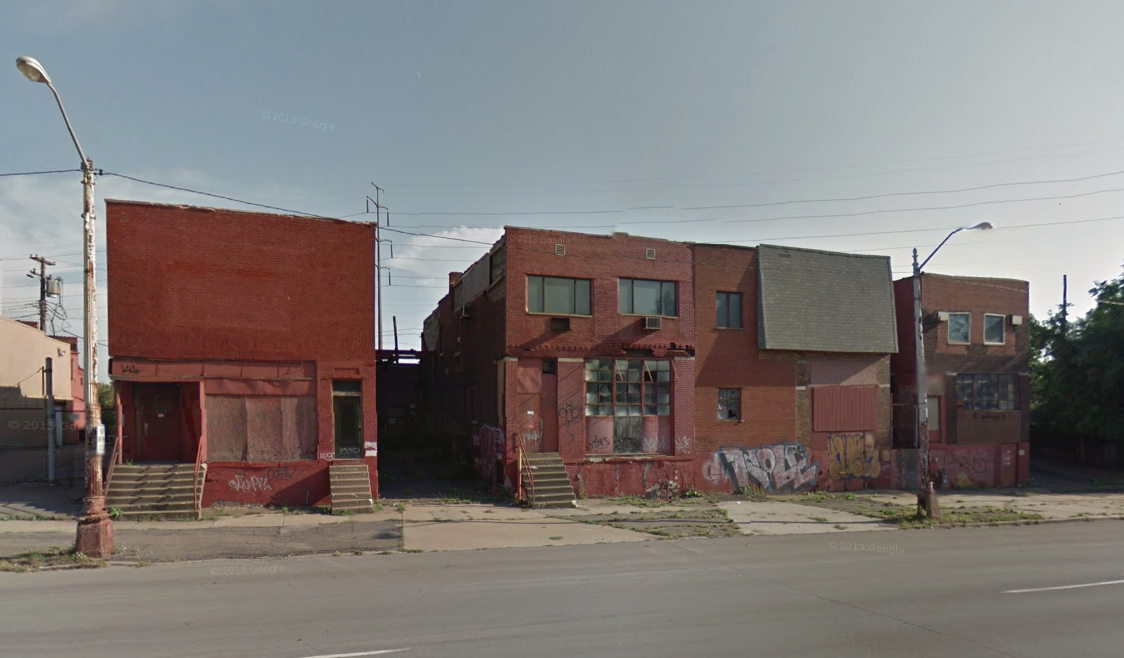 This geography is evident in “Below the Surface.” The menace of a deeply personal and historical landscape is sometimes right on the surface. There is nothing warm or billowy about these pillow forms. They are made from the cold, hard, and rubbery industrial materials that Powers experiments with. His pillow forms are molded from polystyrene, a material used for uniformity and mass production, into an illusion of softness by manipulating their shapes. Sometimes other materials are used, such as the polished concrete in, Untitled, 2011, concrete and the mix of latex in, Untitled, 2010, polystyrene, latex rubber. A few of pieces, with their insides emerging, are even more evocative.

Untitled, 2011, polystyrene, enameled wire, a white pillow form, is comprised of a bottom shell and top layer. The two forms have a silia-like membrane made up of enameled copper wire that peeks out around the seams between the two surfaces. Texture here suggests movement, magnified and slithering. One can imagine, just as sleep takes us, that the unconscious opens up to release memories. The invading detritus of the mundane becomes horrific. In another work, Untitled 2010, polystyrene, jacketed wire is a pillow form where the seams have opened on one side to reveal a gill-like texture. Because this hinted interior is made of white-coated enamel wire, the texture resembles sinew and offers a subtle, otherworldly breathing. It is inviting, sensual, and frightening.

Especially dramatic are the materials and effects of the pillow form, Untitled 2010, polystyrene, silicone caulk. Here the transparent plastic top layer reveals a spiny rolling landscape of white latex silicon spikes. Powers overtly seduces the viewer with the slickness and the association with the manufactured newness of the object. His contradictions are playful: hard and soft, light and dark. He then repels us with the reminder that here is a pillow. This is where we sleep when our childhood night terrors come back to us as dreams of water, submersion, and sci-fi horror. 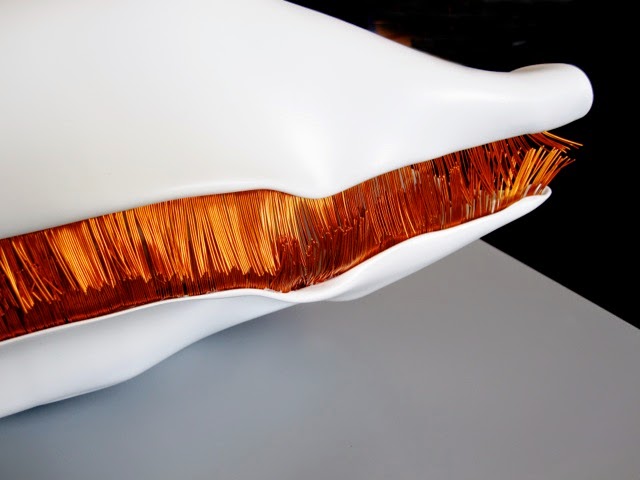 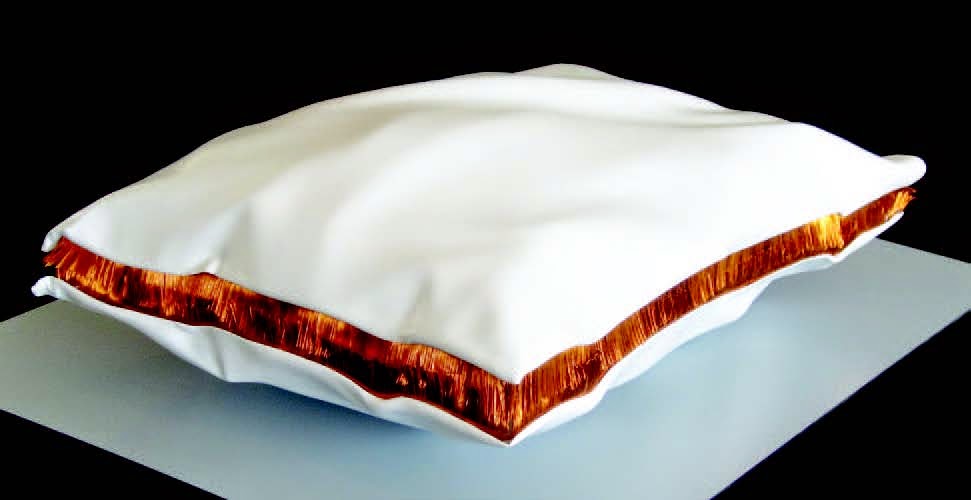 Content is played the same way, pulling the seams open of cultural layers to infuse the medium with the realities of where we come from—through the lens of Powers’ own narrative:

“I have an awareness of the complex cooperative dynamics of a place. The factors that make up the unique characteristics of a particular place: the people, the climate, the industry, the culture and heritage, and the natural environment. These are in play in any “place” and are what becomes its personality. The more time there, the greater the awareness, if you are looking. Keen observation forms a connection that sits outside sentimentality. These observational details become the foundation of the emotional connection, the smell of a soap company or lacquer plant, the neon of a neighborhood bar, a draw bridge tower, the ever present litter that collects along a curb in a viaduct, cast iron street lamps, refinery tanks and two story clapboard homes separated by a potholed street.”

Is this personal landscape available to the viewer? I think so. Powers’ personal experience and relationship with his surrounding environment can not only be observed through the visible layers but also through his control and reconstructing of environment. Following the 1967 riots and the stabbing of a neighbor, the Powers family moved to rural Monore. Powers continued to be influenced by Detroit–his father commuted in daily to run Precision Hardware, and Tim worked there during summers and on Saturdays and later, as a part-time employee while he earned his undergraduate degree at the College of Creative Studies–but his work is shaped by the intersections between the rural Monroe and Detroit.

“In a way, the monumentality of Detroit taught me to look ‘up,’ and agrarian Monroe taught me to look ‘down.’ Both environments had a different, but equally wild nature. Each was full of texture, smells, subtle and dynamic colors and awesome vistas.” 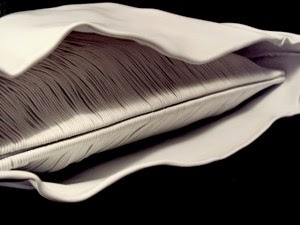 “Below the Surface,” speaks to that experience of the diversity of place. I see a connection between identity and the industrial landscape. Powers evidences an unsentimental love for where he comes from rather than rebellion against it. This is where Powers is especially acute. By his devotion to a material and the development of a symbolic figure, he creates an atmosphere where a descent into the unconscious is a collective experience.

Untitled, 2013, polystyrene, provides a perfect example. A large grid of more than 400 somewhat organic white pillow forms takes up an entire wall and a corner of the exhibit. From a distance, the work appears minimal. They are stark white against the softer white of the actual wall. They resemble multiples, which would not be entirely off the mark. Every pillow form began when pulled from a wooden mold that Powers crafted. Then, however, he methodically made each one unique using a heat gun to create the curls, folds and wrinkles that stir the imagination. I like the contrast between appropriating a material used for uniformity and mass production–polystyrene is usually pulled around a mold tens of thousands of units over to create identical forms–and then tailoring the resulting forms. 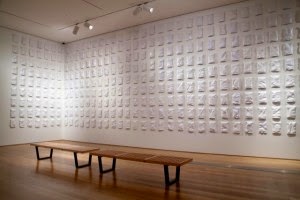 Because Powers renders each pillow form distinctive, the near-repetition of the installation pieces does not create an impression of uniformity. Rather, it ignites a curiosity about each pillow’s personal identity. The illusion from a distance of movement encourages close examination, which results in deep struggle. You have to resist the temptation to run your fingers across the silky and satin surface of the folds. I imagine the downy insides, and the restlessness of each form takes us to an intimate, interior space: sleep, dreams and then excitement, passion, sleeplessness. 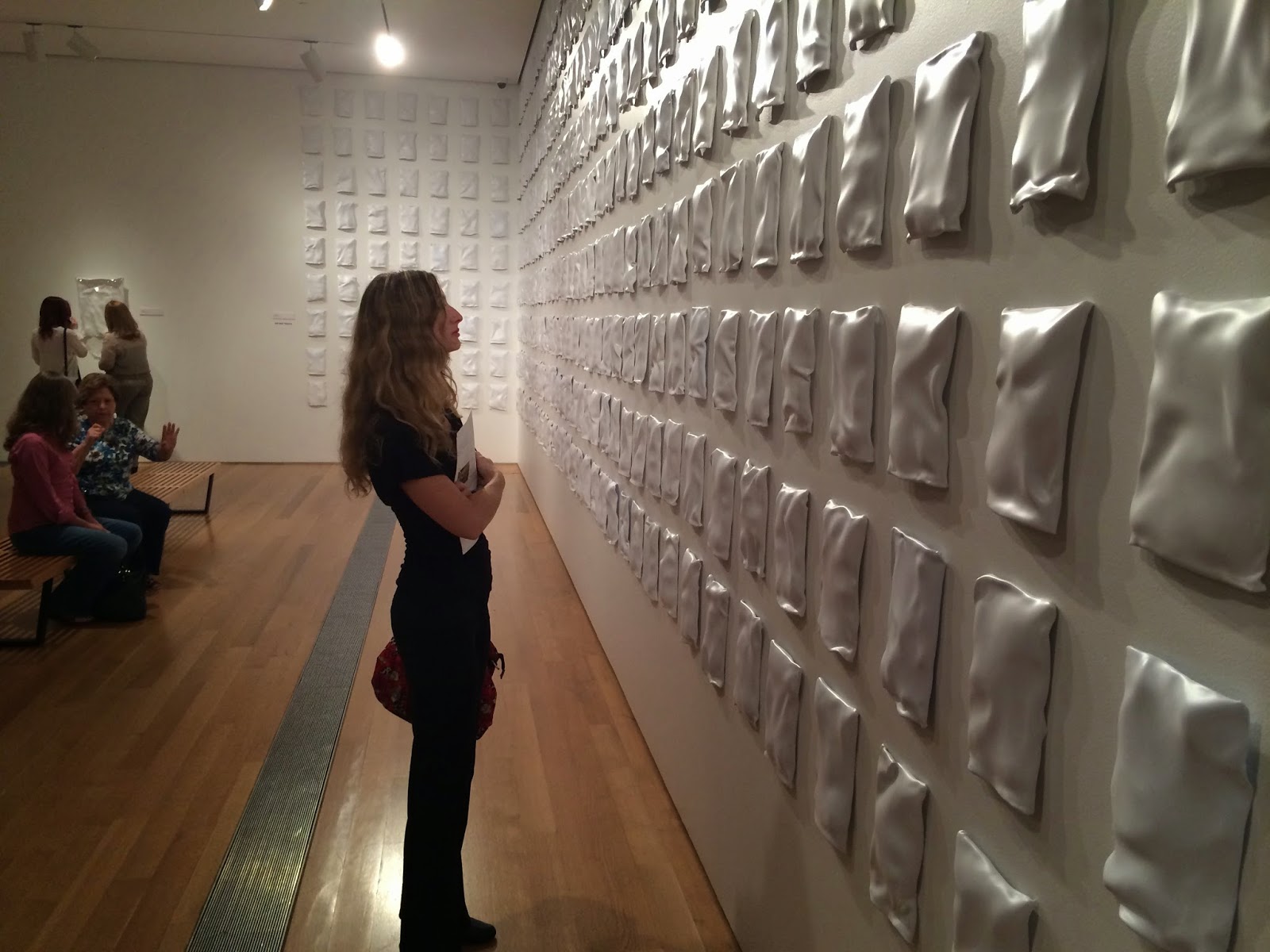 Albrecht Durer’s, pen and brown ink drawing, Six Studies of Pillows, 1493, comes to mind. Durer masterfully depicted folds and wrinkles to evidence the body, and he created adroit likenesses that keenly described life. Powers, however, purposely and less sharply, takes a three-dimensional form and creates a very different effect. Untitled, 2013, polystyrene evidences passive revelation of the act of sleep, lovemaking, violence, despair, and sleeplessness. Instead of rendering material into a representation of direct observation, Powers gives us something interior. The language of wrinkles is somewhat unclear. They are subtle in their shifts. As a symbol, they signify the interior, private experience. This telling mark points to the artist’s interest in materials. The movement and expression, unpredictable and somewhat orchestrated, awakens us to our collective folds of the unconscious. 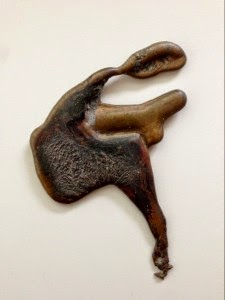 A final note: before the entrance to the exhibit a molten metal artifact is displayed. It evokes a certain intimacy, resembling something animal, the residue of life lived. Powers notes that he wanted to include this piece because although he didn’t make it himself, it provides context for the items he did make. It is one of many artifacts collected from the floor of Precision Hardware by his late father.

“It broadens the definition of what is art and what constitutes a body of work. It is an item I had no control of its creation, yet supplements the discussion of those that I did. I think the interpretive nature of its form provides an access point for the viewer on a basic level, and also supports my relationship to the specific process I experienced with my new work. It went through a similarly transformative process the polystyrene went through, going from rigid, to pliable, to rigid again and changing form in each step. Like many materials it holds limitless potential forms that lie latent in its current form. It is a state that is only momentarily static. That moment ranging from minutes to eons, but it will change again. It was originally not my thought to realty this to the landscape, but it is certainly an obvious parallel.”

With “Below the Surface,” Tim Powers’ expert capabilities as a maker result in a deeply industrial landscape. Inherent to his materials are the playful subversions possible because of our associations with closeness and escape. We all harbor deep internal landscapes. They are expressed as an amalgam of memories, sweet and dark as entanglements of fossilized metal.