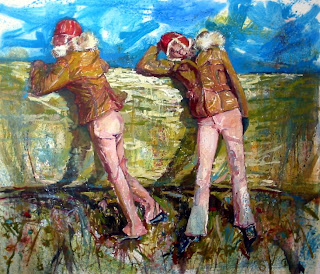 Posted by sparrows at 7:55 PM No comments:

"About a Hundred Things I Forgot," at McDaniel's Rice Gallery, is a very unusual exhibit that doesn't seem like it should be. The subtitle: "Figure Paintings" might lead you to expect an emphasis on those figures. Robert Jones has some other ideas.

Figures are integral, embedded in brushstroked scene, figure and ground, subtle and striking. While foreground figures draw initial attention, a closer look reveals others emerging from context, clear one moment, hazy the next; surrealism where representation is hinted. Jones' style intrigues, never letting you relax, keeping you searching.

His palette is unsettling, especially when he works in pastels. Pale coral and robin's egg blue mix with ochres and greens, figures drawn in the same hues, abstracting while not quite. "The Mighty Have Fallen" creates a somber mood despite the light colors. "Wonder's" woman is tired, only a hint of her strength remaining in her eyes. Jones' colors can be unexpected, not quite saturated, drawing you in to make them deepen. Oranges and reds, black and hunter are clearer, but still require the viewer to work with them to really see the painting.

Jones' brushstrokes are important. He paints vertically, starting above and ending below the canvas, diluted colors dripping like a curtain in front of images. His strokes are rough, as if his brush were old and not quite clean from its last painting, giving his work a raw feel and an energy that is palpable, a sense that something has gone before and will come after this moment in time.

"Limes" is green and saffron touched with gold, young girls barefoot in front of windowed doors, autumn hues at early morning or just at twilight, sun slanted warm, coming aware, possibilities endless. Coming of age moves indoors as a waiflike girl stands solid in a vortex, waiting for what comes next in "The First There Was A Hare."

The "Truffle Hunt" is complex. Lions blend into grassland, orange and red, brown and green while a young girl moves across our view, unaware or unconcerned. Look deep and a man appears, at first part lion, then on his own amidst them. Reality, dream, subconscious wonderings? It is left to us to decide.

"Forest Morels" is wonderfully composed, saturated colors still hiding details of friends, one white, one black on bright blue bikes. Jones perspective is right on in "Sparrow Point," two women, one older, aging house behind - or are they the same woman moved through time?

Don't be too quick with Jones' work. Walk around more than once. It will meet you in a place where time suspends and things you forgot come home.

Washington, D.C. – [Tuesday, January 8, 2008] – The Long View Gallery is pleased to announce an exhibition of new works by Robert Sparrow Jones and Jamie Pocklington. The opening reception is on Friday, March 28, 2008 from 5pm to 8pm.

The artists featured in this month's exhibit of works were handpicked by Stephen Bennett Phillips of the Phillips Collection for the New American Paintings publication, Volume number 69, released in the fall of 2006. The work was chosen from the 2006 Mid-Atlantic competition. While time has passed since they were recognized for their work nationally, we at the Long View Gallery were drawn to the strength of their work.

Robert Sparrow Jones grew up in rural Pennsylvania in the 1970's. His works are loose and energetic, relying on a bright and forceful color scheme to evoke an emotional response from the viewer. Mysteries that everyday experiences bring are the catalyst for his inviting and seductive work, embodied in figures invested in their daily routines. Galleries in Washington state, New York, and Baltimore have housed his work and he currently works as an adjunct professor at Towson University.

Jamie Pocklington graduated from Virginia Commonwealth University in 1992 and currently lives in Richmond, Virginia. He paints quasi-realistic people in abstracted settings. People often feel like they know or have seen the subjects of his work. This is not likely, unless you were drinking with those kids at beach-week, or were at that New Years Eve party in Australia, and we all have made and forgotten, school projects. The subjects come mostly from internet photos albums and image search engines. He is drawn to images that have universal qualities that he then collages into new scenarios, out of context of the original photos. As he paints, he often wonders if an unwitting model is out there thinking, "I feel like someone is painting me, and If I find them, I will sue them."