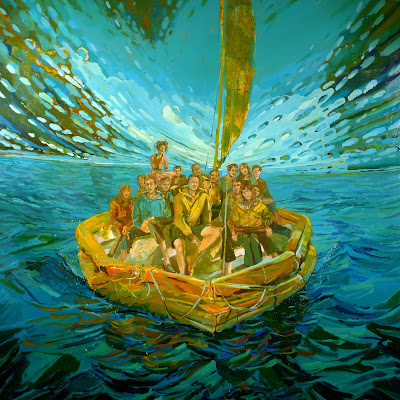 Admittedly, Athens is a town of learning and music.

Art is considered in the abstract, ‘his or her songwriting is an art’ or ‘he has mastered the art of playing guitar.’ But art, in the traditional sense and as a scene – beyond the halls of Lamar Dodd – is growing, and to know where it’s headed look no further than T-W-O, This Way Out, gallery’s current exhibition featuring paintings by Robert Sparrow Jones.

“[T-W-O] is a new thing and we’re feeling it out, keeping it slow,” Jones said. “On opening night it was crowded. It’s nice to see people looking at art as a thing to do and it’s nice to see it happen outside of the UGA galleries.”

Jones, a relative newcomer to Athens, is a teacher by day and an artist by trade.

Jones is from Jermyn, a town north of Scranton in rural Pennsylvania.

“I was able to be in the woods all the time building tree houses,” Jones said. “That sense of strength and fragility of nature, even the idea of a tree fort or a hut is fragile.”

Jones’ appreciation of fragility is more an understanding of nuance, of details. Not surprisingly, he was first drawn to film as a creative outlet.

“When I picked up my first camera I was in high school,” Jones said. “I wanted to be a filmmaker, creating stories and narrative, but the camera, well, it also helped me towards understanding how to design a picture on a plane.”

Jones went on to study at Kutztown University, expanding his work from writing and photography to printmaking and later painting, or ‘”from the mechanical to the physical,” he said.

“Going to college was beneficial and I’m still interested in writing and ecology. When I came to painting it was the summation of everything but with one extra thing: color,” Jones said. “Kutztown has a good art department and for an artist it’s a really cool place. It’s a place where artists remain and it’s still kind of a magical place.”

But Jones didn’t remain, instead he moved west, far west, to Seattle.

Jones, though, hadn’t given up filmmaking. In fact, his work in that medium ended up opening a few doors.

“I was commissioned to make a documentary on Red Kelly, a jazz musician,” Jones said. “He lived in Tacoma and had opened for [Frank] Sinatra and Elvis [Presley]. People like Tony Bennett would stop by to see him on their way through.”

Around the same time, Jones started teaching at community colleges on the side.

And so Jones went to Baltimore and to the Maryland Institute College of Art – MICA.

“Baltimore was a hard place to leave, but I didn’t know that when I got there” he said. “I drove across the country with my old Saab, no air conditioning and in the summer. I came into Baltimore from the west side, just pure devastation. It is where ‘The Wire’ shot, and I thought, ‘I just left beautiful Washington state for this?”
But Baltimore surprised him, welcomed him even.

“It’s still a fun, viable place for artists. It’s the last city on the East coast to live on the cheap,” Jones said.

The community of Baltimore’s creative scene and of MICA, specifically its people, intrigued Jones. One person in particular became an influence and a friend.

“Grace Hartigan, she was the last living abstract artist,” Jones said. “She knew [Elaine] de Kooning and [Jackson] Pollock and was good friends with Frank O’Hara the poet. She’s so interesting, and so crass.”

After completing his degree, Jones taught at both MICA and Towson University.

“I’d teach four or five classes at each. It was OK money but it became too tough to do after a while,” he said.

So Jones looked elsewhere, applying to schools and eventually accepting at position at Piedmont College in Demorest.

“I moved right to Demorest and it was quite the eye opener,” he said. “After living in cities for 20 years there’s nothing out there. I lived near water for 15 years and now I’m landlocked, I’m thinking, ‘Where’s my ocean?’”

“I love it. In high school of course I loved R.E.M. and I actually had this T-shirt, the Life’s Rich Pageant tour, and on the back it had a bird’s eye view of Athens,” he said. “Athens has a mystique about it, and some legends to it.”

But for an artist who’s spanned the coasts, where or what to next?

“I don’t know where it’s going to go,” Jones said. “It can be frustrating but it keeps me on my toes.

postulate honest or otherwise, they terrific got their produce in the [url=http://www.dalinsell.co.uk/]ugg Boots sale[/url]
usa on the west coast seat expert is effortless passion for winter www.dalinsell.co.uk
season boots. Designed with the identical luxurious twin-confronted diploma because the adult boot, the inside of this boot is truly soft and comfortable your kid will not [url=http://www.mpboots.co.uk/]cheap ugg Boots[/url]
ever want to take them of. This makes it a comprehensive large-remedy wool to affiliate marketer with and I would acclaim it for abate clothing like jewelry and caps rather that total adequate beefy sweaters..
Acquiring ugg boots clearance is a new style preferred in Europe. Practically just about each and every girl???s targets of owning a single pair of UGG boots, even gals decide on to be a lot a lot more style. A various word calls them who keen on UGG boots as getting a group like UGG girls of all ages.
and Mrs is some other sport precisely exactly where you ask an person 50 % of the troubles with regards to the other in his absence. He wants to corroborate the replies when he is invited back once more into the space. Most individuals really don go to the theatre each individual calendar year, so probably with your close friends on St.
Slush puddles, wind chill, piles of snow. None of it mattered. They appear clunky but they actually appear fairly excellent. As opposed to runners goods rates you generally locate at shops, costs presented by shops are less expensive plus more sensible. So if you really feel obtaining ready to acquire a set of this type of cheap uggs on sale, you are going to be able to verify out outlet merchants inside your areas initial. Cheap uggs on sale is usually usually your trunk built via sheepskin.

946331 [b]Tag:[url=http://www.cheapraybanaviators1853.org/]ray ban sunglasses sale[/url],[url=http://www.cheapraybanwayfarers1853.org/]cheap ray ban[/url],[url=http://www.oakleydiscountoutlet.org/]ray ban sunglasses outlet[/url],[url=http://www.oakleydiscountsunglass2013.org/]discount oakley sunglasses[/url];Links:[/b][url=http://www.Classmates.com/]cheap ray ban sunglasses[/url]
with constant innovation and excel, plus they are thought to be another kind of traditional function amongst all of the shades.Perhaps the actual continuous development as well as stand out would be the solution to have an worldwide manufacturer to savor a good itinerant existence.After that this is a issue which choosing doctor prescribed shades. Like a issue associated with truth each kind associated with doctor prescribed shades offers their very own particular functions. For instance, prescribed sun shades which usually blend the particular top features of equally prescribed spectacles and also sun shades. They may be specifically made for people myopia which must be outside the house usually. They will eliminate the stops in which eyeglass dons must use lenses any time they wish to use sun shades.Because it could everything that currently you can find handful of prescribed sun shades in the marketplace, in addition to the models in addition to designations usually are confined often. They will quite possibly meet the prerequisites connected with eyeglass wearers. This well-known sunglass model, so one of these usually are most in-demand coloration.Altogether, Rayban solar shades, many last of all profitably construct a latest making primarily for ones myopia,