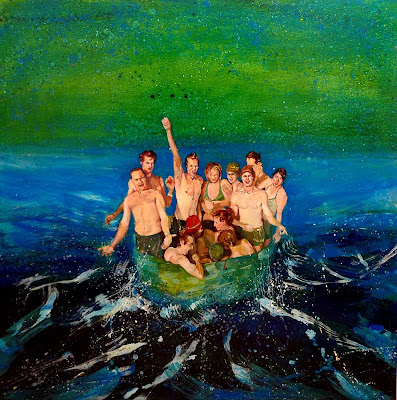 Troubled Like the Restless Sea: Entering the This Way Out (T-W-O) Gallery is a bit like going down the rabbit hole. The gallery, situated in the hodge-podge strip mall above Ben’s Bikes, looks like a parlor in a historic home. Wood floors, a small table arranged between two welcoming arm chairs and a fireplace are unexpected in a building that shares a roof with a tacky adult novelty shop, but inside are paintings that similarly evoke a dreamlike state. Robert Sparrow Jones’ large-scale oil paintings share with the Romantic masters a sense of grandeur and the sublime.

The figures in these richly hued paintings inhabit land and seascapes or empty houses and fields. The subjects appear like a half-remembered dream or the record of a stranger’s memory in a found photograph; you have some clues as to what is going on, but the more you look, the more mysterious it becomes. Jones studied with Abstract Expressionist painter Grace Hartigan during his MFA work in Baltimore, and this connection appears in the splashes and drips that texture the canvas beneath the high-gloss surface, giving the scenes an even greater sense of movement and drama. His background also includes creative writing and photography; both disciplines are revealed in the way he sets up enigmatic narrative snapshots within his compositions.

My favorite paintings are the seascapes, where a blue-green ocean envelops and threatens to consume curious collections of figures adrift in crowded boats. “Shelf-Cloud” (2010) and “Maelstrom” (2010) appear almost as pendants, the former a picture of a boating party embarking on some unknown voyage, the latter a portrait of a similar gathering of men and women experiencing rough waters as their boat is tossed on frothy waves. Elsewhere, Jones paints figures in rural landscapes in radiant gold and red. Difficult to nail down to time or place, these, too, seem part of an in-between space. The detail with which Jones paints his subjects’ varied expressions allows the viewer to make imaginative leaps in thinking about what is happening in the painting, something you may still contemplate long after you have left the gallery. T-W-O is open by appointment and from 6–8 p.m. daily, Mar. 10–20.

Labels: A Nice Review from the Flagpole Magazine; My Solo Exhibit in Athens Last March